The possibility of infection after filtration can still occur due to the filter, especially the problem of accumulation of dirt, pollutants and not being properly cleaned or maintained.
In the previous article, the scientists presented evidence to refute the rumor that cool boiled water may contain more bacteria and viruses than un boiled water, thus causing the risk of cancer in humans. This article continues to decode the second rumor.

The second rumor: The water is “changed in structure” after boiling

Remember, the structure of a water molecule is a chemical compound of one oxygen atom linked to two hydrogen atoms (Figure). The bonds between water molecules are weak bonds, so they stick together for only a fraction of a second and then separate to connect with other water molecules.

At 100 degrees C (boiling temperature), the structure of the water molecule is not changed, only changes in the link between one molecule and the other. Therefore the rumor above is not scientifically correct. 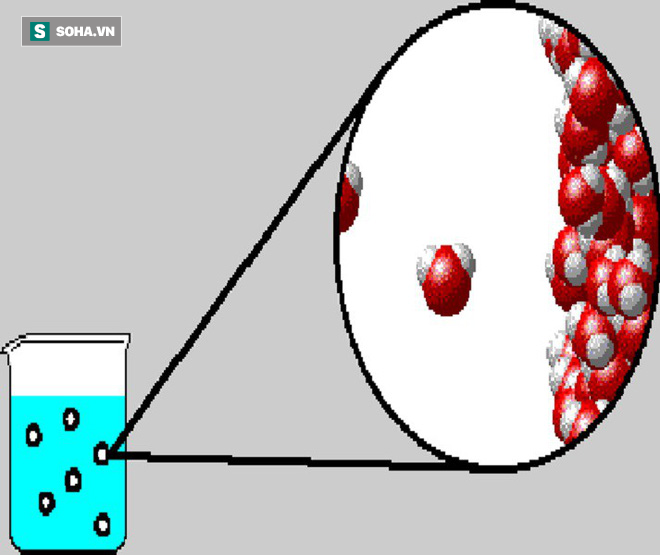 During the boiling process, the water molecules (red: oxygen, white: hydrogen) do not change the structure but only change in bonding and evaporate from the liquid surface.

In fact, it is true that when boiled, the oxygen in the water will be lost, but after cooling, the oxygen concentration will return to its original level because the diffusion of oxygen is natural and greatly depends on the temperature. .

The idea that during boiling, water can lose some minerals or trace elements, according to the latest research, is also wrong.

The boiling and evaporation of trace elements and inorganic minerals present in water such as sodium, calcium, magnesium, iron, copper, and zinc ions are many times higher than the boiling point of water. Therefore, when the water boils, these trace elements do not evaporate, but remain in the clear, warm water.

Organic substances such as vitamin B3 and vitamin C can decompose when the water is boiled but these vitamins do not exist enough in natural drinking water [13]. There should be no confusion between cooking and boiling water.

Water accounts for 50% -75% of body weight and is important for all physiological, biochemical and homeostatic processes.

On a large scale, boiling water treatment is shown to be equally effective and much faster than other methods such as chlorine, UV, or silver / copper wires. However, due to the fuel consumption, this method is not preferred when dealing with large areas .

At the household level, according to WHO, boiling water is the most effective and economical sterilization method of all, as it can kill almost all pathogenic microorganisms

These include physical and chemical properties such as color, odor, hardness, pH, content of inorganic and organic substances (nitrate, nitrite, sulfate) and heavy metals such as iron, manganese, and jaw. The amount of microorganisms such as Coliform, E.Coli, etc … and all must be below the maximum safe concentration for human body according to WHO standards.